Published in the Desert Magazine
April 2016

By The Cypress Group 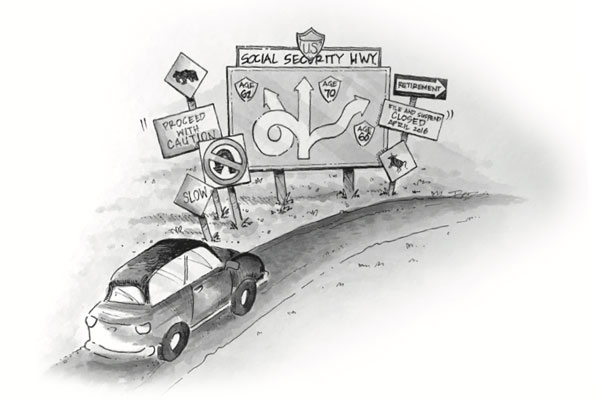 With the demise of guaranteed pensions, and in light of the risks you face in managing your own retirement assets, maximizing Social Security becomes a critical part of retirement planning.  Be aware of recent changes to common social security planning strategies – the deadline to “file and suspend” is April 29, 2016.

One of the most important decisions a retiree faces is when and how to apply for Social Security benefits. This is not a decision to be made lightly; the lifetime, inflation-adjusted income promised by Social Security makes it one of a retiree’s most significant assets.

If you were to calculate the present value of the Social Security income stream, it would rival or exceed the lump sum many people have in their 401(k) plans at retirement. Serious investors work hard to maximize the value of their IRAs and 401(k) plans, often not realizing that their Social Security “asset” can be maximized as well. Pre-retirees can enhance its value by building a strong earnings record and applying for benefits at the optimal time.

Let’s say you have a primary insurance amount (PIA) of $2,500. This is the amount of monthly income you will receive if you apply for Social Security at your full retirement age. Full retirement age is 66 for baby boomers born between 1943 and 1954. Let’s also say you have a life expectancy of 86. This is slightly longer than the average life expectancy, but there’s a good chance you or your surviving spouse will live at least that long.

If you apply for Social Security at 62, your benefit will be reduced to account for those four extra years of checks. If your PIA is $2,500, your permanent benefit would be $1,875, which is 75% of $2,500. If you apply for benefits at 70, your benefit will get a boost of four years of 8% annual delayed credits, giving you a permanent benefit of $3,300 a month.

Now let’s see what the lifetime value of your Social Security income stream would be depending on when you start your benefit.

When the combined benefits for a married couple are taken into consideration, the analysis becomes more complex. You must take into account each spouse’s age, their combined life expectancies, the benefit based on each spouse’s own earnings record, the spousal benefit for each spouse, and the amount the surviving spouse would receive after one spouse dies.

With the passage of the Bipartisan Budget Act of 2015 some common Social Security maximization strategies have been changed.   These changes may reduce the potential claiming ability for many retirees, but there is still time to act.

Currently an individual who is at or past Full Retirement Age (FRA) can file for individual benefits, but suspend receiving them to allow his or her own benefit base to continue to grow and allow a spouse to collect based on the spouse’s record.   After April 29, 2016 “file and suspend” will no longer enable a spouse or dependent to collect benefits based on the filer unless the filer takes a benefit.

Consequently, if you were born prior to April 30, 1950, which means you are at FRA on April 29, 2016, and have not filed (or even if you have filed within the last year) it makes sense to assess whether this social security maximization strategy could benefit you.

Previously a spouse who was past full retirement age and who had not received any benefits could choose to receive his or her own benefit or choose a spousal benefit (referred to as a restricted application).   Now anyone who is over age 62 by the end of 2015 is grandfathered and retains the ability to restrict their claim to spousal benefits only if they wait to collect until they reach their FRA.

Individuals who are younger than 62 at the end of 2015 do not have the choice of which benefit they collect when they reach FRA.   Regardless of their age, they will be “deemed” to have filed for the highest benefit.  They no longer have the option to restrict to their spousal benefit only.

Every social security claiming situation can be different and common strategies that apply to others may not apply to you. That’s why it is important to get a customized analysis of your claiming options and to understand both your potential monthly income as well as the amount of Social Security you stand to receive over your lifetime based on your claiming age and particular situation.

The information on this website is provided as information only and should not be considered investment, tax or legal advice or a recommendation to buy or sell any type of investments. Advisory services are only offered to clients or prospective clients where our firm and its representatives are properly licensed or exempt from licensure. Past performance is no guarantee of future returns. Investing involves risk and possible loss of principal capital. No advice may be rendered by our firm unless a client service agreement is in place. Form ADV and Form CRS contain important information about the advisory services, fees, business, background, and experience of advisory personnel. Form ADV is publicly available and may be viewed here. Form CRS is publicly available and may be viewed here.